The beginnings of public key cryptography

Cryptography, helping lovers since 2000 BC

O Romeo, Romeo! wherefore art thou Romeo? Deny thy father and refuse thy name; Or, if thou wilt not, be but sworn my love, And I’ll no longer be a Capulet.

Confidentiality: Has Tybalt seen the message?

Authenticity: Is the message really from Juliet?

Integrity: Is the message exactly what Juliet meant to send?

Romeo and Juliet have met in the Capulet’s orchard. Upon falling in love, they have agreed on a secret key S.

The modern day Romeo and Juliet have only met on Tinder. They want to share their most intimate secrets in a confidential way, but the Internet is fraught with pirates, hackers, governments, and tech-savvy Italian moms wanting to spy on their messages.

Can Romeo and Juliet establish a common secret by chatting on a public channel without having ever met before in person? 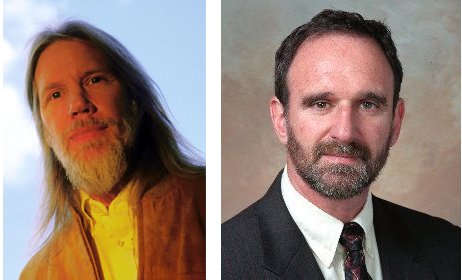 We stand today on the brink of a revolution in cryptography. The development of cheap digital hardware has freed it from the design limitations of mechanical computing and brought the cost of high grade cryptographic devices down to where they can be used in such commercial applications as remote cash dispensers and computer terminals. In turn, such applications create a need for new types of cryptographic systems which minimize the necessity of secure key distribution channels and supply the equivalent of a written signature. At the same time, theoretical developments in information theory and computer science show promise of providing provably secure cryptosystems, changing this ancient art into a science.

Lady Capulet is spying on Romeo and Juliet’s conversation:

We cannot hope discrete logarithm to be unsolvable for any group. But we can hope it to take VERY LOOONG to solve.

And if you know a little about complexity theory:

That is all elements of \(\FF_q\), except \(0\), with group operation given by multiplication.

Capulet in the middle

It is easy to prove that if CDH is hard, then the Diffie-Hellman key exchange is secure against passive adversaries.

However, if Lady Capulet can intercept messages on Tinder and manipulate them…

Instead of an ephemeral key, Juliet has a long term secret key anyone can use to send her private message.

From Diffie-Hellman to PK encryption: the El Gamal protocol (1985)

But how does Juliet know that the message is really from Romeo?

Idea: look for collisions of the form

It is usually assumed that unfeasible amounts of computation start at \(\sim 2^{80}\) elementary operations.

Key lenghts (in bits) for given security level.

Equivalently, it is the set of triples

up to the equivalence relation

The chord and tangent law

Let’s work out some examples

Key exchange in a post-quantum world

Spooky action at a distance (EPR)

The most dangerous quantum circuit ever

RSA is dead. Diffie-Hellman is dead

Fork me on GitHub